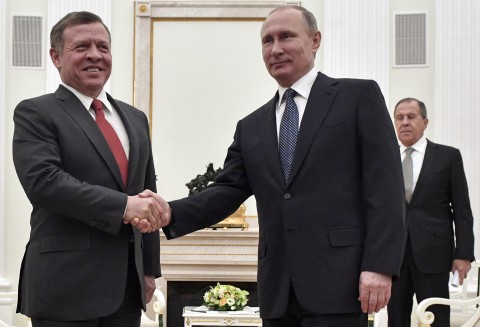 Visiting King Abdullah II of Jordan discussed with President Putin on Wednesday in Moscow the developments in the Middle East presently marred by terrorism and extremist groups.

Abdullah said Amman recognizes “Russia’s crucial role” in solving the Syrian conflict and “many other regional issues.” Russia together with Iran and Turkey spearheaded indirect talks in Astana, Kazakhstan, between the warring Syrian parties, but no tangible results were reached.

King Abdullah II said Jordan supports “the settlement process” as he voiced appreciation for Moscow’s role while hoping that “the Syrians will have a common inclusive future.”

President Putin was grateful for Amman’s support. He said the talks are “developing on the basis of a very important decision that has been achieved” such as the cessation of hostilities between the armed rebel groups and pro-Assad forces.

King Abdullah II thinks Russia’s approach in ending the crisis in the Middle East is credible, although it is not being welcomed by some countries. He reaffirmed that Jordan and Russia are bounded by a strong friendship and have “a common vision, which will contribute to stability and the normalization of the situation in the region.”

Russia’s intervention in Syria has helped President Assad to push back armed groups and take over significant strong rebel-held positions.

The Astana meeting is considered by President Putin as a “good basis for continuing” the upcoming talks in Geneva under the auspices of the United Nations early next month. The Syrian war has been going on for more than six years and efforts have recently been intensified to end it.