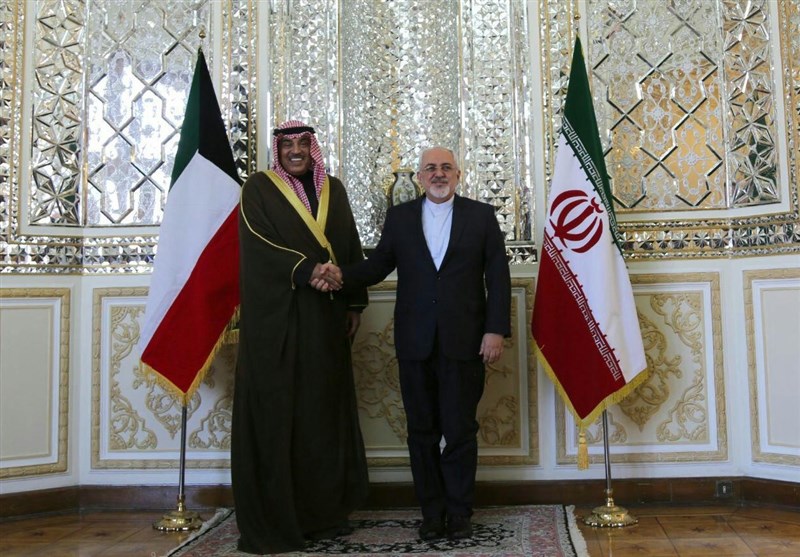 Kuwaiti Foreign Minister Sabah Khaled al-Sabah paid a one-day working visit to Iran on Wednesday, in an attempt to warm up the strained relations between Tehran and other Gulf States.

The minister who delivered a message from the Kuwaiti Emir, Sheikh Sabah Al-Ahmad Al-Sabah, to President Hassan Rouhani stated that “it’s necessary that the differing views and misunderstandings between the countries of the region should come to an end in a calm atmosphere and through frank dialogue.”

Spokesman for the Iranian Foreign Ministry Bahram Qasemi said the visit is part of periodic diplomatic meetings between the two countries that have been going on for a long time to discuss bilateral ties and cooperation as well as regional and international developments of mutual concern.

The Iranian foreign minister Mohammad Javad Zarif said after meeting with his visiting Kuwaiti counterpart that Kuwait is a “good and important” neighbour. He commended Sheikh Sabah’s role in “strengthening neighborliness among regional countries.”

The Kuwaiti Foreign Minister underscored the “importance” of Tehran in regional and international matters as he hoped for a dialogue between the countries around the Persian Gulf.

The Iranian State TV reported that the message from the Emir of Kuwait to President Rouhani was about the “necessity to improve relations.”

The Kuwaiti minister expressed hope that ties between Gulf States and Tehran “will normalize” and that they will work together as “regional partners,” the TV said, adding that President Rouhani noted that unity, integrity and helping each other is needed to fight terrorism in the region.

A communiqué on the Iranian President’s website read that Rouhani informed the Kuwaiti Minister of his government’s intentions to improve “friendly and brotherly” relations with neighboring Muslim countries based on “mutual respect, positive neighborhood ties and Islamic brotherhood.”

Relations between Iran and other Gulf States have proven challenging due to their foreign policies in the region as showcased in the Syrian and Yemeni conflicts where they support different parties.

Saudi Arabia and Bahrain severed diplomatic ties with Iran in January 2016. Other Gulf States have stopped short of following suit due to the long-standing trade links and shared access to oil and gas fields with Iran.

Al-Sabah’s visit is also reportedly expected to prepare the ground for a meeting between Iran and the Gulf Arab states.