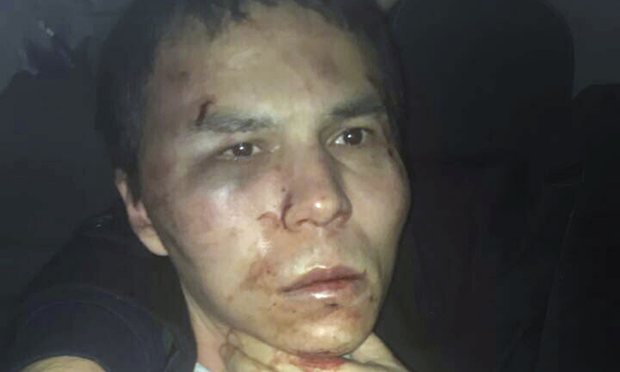 Turkish security authorities Monday announced the arrest of the alleged attacker of Reina nightclub in Istanbul on the New Year eve.

The suspect identified as Abdulkadir Masharipov; an Uzbek national was pinned down in a house in senyurt district of Istanbul, just 25 miles from where the attack took place, The Guardian reports.

Another man, a Kyrgyz national, and three women were also pinned down in the raid.

Images of a man with bruises and blood on his face and shirt claimed to be of Masharipov went viral on social media.

The suspect and the four other arrestees have been transferred to Istanbul police headquarters for interrogation.

“In the name of our nation, I thank primarily our minister, Suleyman Soylu, our police and intelligence organizations who captured Reina assailant,” he wrote in a tweet

Masharipov was identified as the main suspect of the attack from CCTV footage.

Thirty-nine people were killed and seventy people have been injured in the nightclub massacre, claimed by the Islamic State group.

The victims were from several nationalities including Moroccan, Israeli, Tunisian, and Saudi.

It is reported that the suspect, following the attack, initially hid in a safe house and was later joined by his wife and children before they ran away to another place.

Police identified his whereabouts several days ago but waited to monitor his movement and his contacts before the raid, report say.