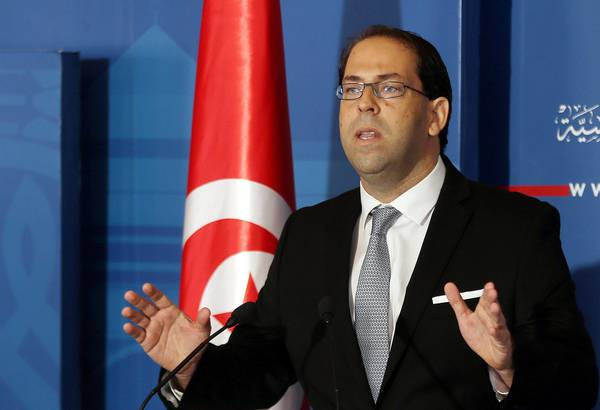 Tunisian Prime Minister Youssef Chahed said terrorism has grown into “a global problem” and “no longer has a nationality.”

In an interview with Der Spiegel online, the Prime Minister called for intensive global efforts to combat the scourge and prevent terrorist attacks that are often planned “with the help of the internet.”

He described the attack carried out by Tunisian national, Anis Amri, who killed 12 people after ramming a truck in a Christmas market in Berlin, as an isolated but appalling incident.

Chahed brought up the issue of Tunisian foreign fighters saying that “the exact number” of Tunisians that are fighting for the Islamic State group stands at 2929 but “many of them have since died.”

United Nations estimates put the number of Tunisians enrolled in extremist groups at around 5,000.

The return of Tunisian nationals who have fought in the ranks of extremist groups is increasingly becoming a cause of concern for the population, which staged several demonstrations to voice opposition to their return. They fear the number of returnees will increase because ISIS is losing ground in Iraq, Syria and Libya. Authorities have demanded that “exceptional measures” be undertaken to combat the phenomenon.

Last year, President Beji Caid Essebsi acknowledged that “many of them want to return, and we can’t prevent a Tunisian from returning to his country” but security forces will continue to be “vigilant.”

Chahed in his interview with the German media said “every jihadist who has fought for IS in Syria or in Iraq will be immediately arrested upon his return” as per the 2015 anti-terror laws.

2015 has been one of the most deadly years since the Arab Spring in Tunisia as three separate terrorist attacks left dozens of people dead, mostly foreign tourists.