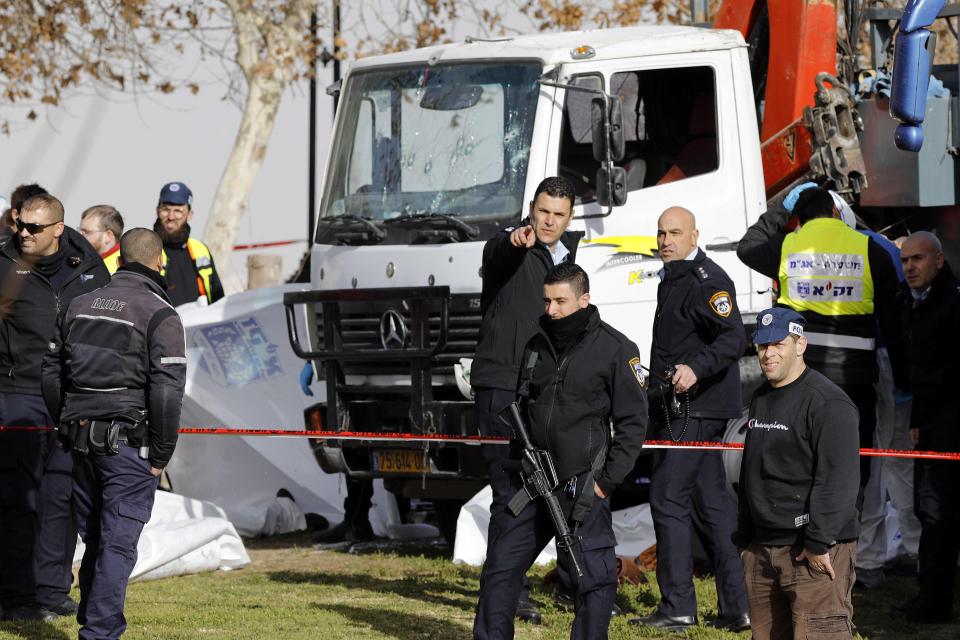 Four Israeli soldiers were killed in a Sunday truck attack that sped into a crowd of soldiers visiting the Haas-Sherover Promenade, which offers a panoramic view of Jerusalem and the Old City. The attack is being dubbed as the first attack by a militant of the Islamic State group.

Prime Minister Netanyahu said the assailant was identified as Fadil al-Qunbar, 28, and “all the signs” have shown that he is a “supporter” of the extremist group. Qunbar died from bullet shots sustained during the attack.

Security has been reinforced in the neighborhood of the Jabal al-Mukkabbir where the attacker lived and heightened police security operations are taking place in a number of Arab neighborhoods, Police spokesperson Micky Rosenfeld stated on Twitter.

Netanyahu thinks that the “vicious and tragic terror attack” could be linked to the Nice and Berlin attacks in France and Germany respectively while Defense Minister Avigdor Liberman said the attack was simply because “we are Jews living here in the State of Israel.” The area is considered to be part of the illegal Israeli settlements.

As investigations continue, a gag order has been imposed by a Jerusalem court. Netanyahu gave assurances that “a number of actions” will be undertaken to ensure that such incidents do not take place again. He didn’t go into details.

However, Hazaem Qassem, spokesman for the Izz Ad-Din Al-Qassam Brigades (Hamas’ military wing), said in a post on Facebook the “heroic” truck attack is “not an isolated event” given the “continuous operations in the West Bank and Jerusalem… but rather a decision by the Palestinian people to revolt until they attain their freedom and liberation from the Israeli occupation.”

Tel Aviv considers such remarks as inciting violence. Since September 2015, Palestinian attackers have killed 40 Israelis and two visiting Americans. During that time, 230 Palestinians have been killed by Israeli fire.