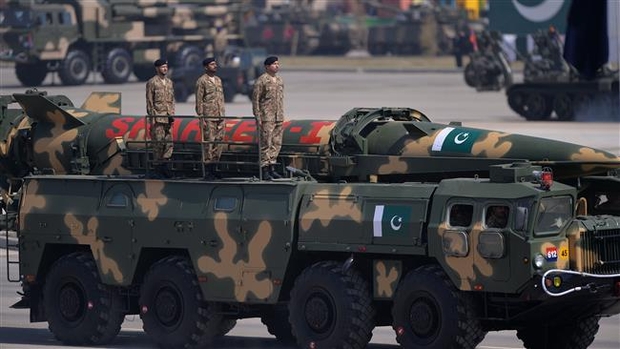 Pakistan’s Defense Minister Khawaja Muhammad Asif warned Israel that they have nuclear power and would use it on the Jewish state after a news agency quoted former Israeli Defense Minister Yaalon stressing that “if Pakistan send [sic] ground troops into Syria on any pretext, we will destroy this country with a nuclear attack.”

Asif, in reply to the threat, posted on Twitter that the threats of the former defense minister will be answered in kind. “Israeli def min threatens nuclear retaliation presuming Pak role in Syria against Daesh. Israel forgets Pakistan is a nuclear state too.”

Yaalon’s statement was published by the AWD News site on December 20 but only caught the attention of the Pakistani minister on Friday.

The Israeli defense ministry has released a statement highlighting that AWD is a site that publishes fake news and its report was “entirely false.” It also tweeted that the statement attributed to Yaalon “was never said.” Pakistan has not responded to the statement.

The two countries do not have diplomatic ties but the spat that was provoked by the allegedly fake story signals the danger of such reports. Although Israel continues to maintain its policy of ambiguity with regards to being in possession of nuclear weapons, Pakistan became a nuclear power in 1998. Both countries are not signatory to the nuclear Non-Proliferation Treaty (NTP).

In this new digital age wherein information can easily be accessed, the trend of publishing fake news stories has also recently been on the rise with many easily believing whatever is published on the world wide web as a news report that is genuine.

In a bid to combat the disgraceful growing trend, Google and Facebook as well as other search engines and social media platforms have both announced their determination to stop non-authoritative and fallacious sources by rearranging their algorithm.