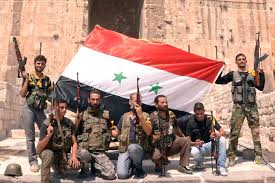 The Syrian government has described the recapturing of Aleppo as a “victory” that marks “an important turning point” in the country’s more than five-year old war as it looks forward to taking over other rebel-held territories.

Rebel groups admitted that surrendering Aleppo is a “great loss” in their fight to end the Assad regime and Ahmed Qorra Ali of the Ahrar al-Sham rebel group lamented that the city is “now under the occupation of Russia and Iran”; main supporters of the pro-Assad forces.

Assad’s government currently controls Aleppo, Damascus, Hama, Homs and Latakia, which signals the significant role that Russia has played with its airstrikes over a year together with the support of Iran and Hezbollah. This latest victory has boosted President Assad’s morale as he claimed that it is a “basic step on the road to ending terrorism in the whole of Syria and creating the right circumstances for a solution to end the war.”

Analysts fear that Idlib could be the next major town to be targeted by the pro-government forces.

UN special envoy for Syria, Staffan de Mistura, said many of those who preferred going to the rebel-held city could soon be dealing with the same experience they had in Aleppo because Idlib “could be in theory the next Aleppo.”

The Organization of Islamic Cooperation (OIC) responded to the recent developments and requested the implementation of the UN Security Council resolutions for a ceasefire to end hostilities and lift the siege on civilians. It noted that there are “crimes of war and crimes against humanity” going on in Syria while stressing on the need for international cooperation to combat terrorism, extremism and violence, particularly in Syria, as well as the vicious crimes committed by the terrorist organizations like ISIS and Jabhat Al Nusra. The communiqué issued at the end of a meeting reiterated the commitment of OIC member states to the sovereignty, independence, and territorial integrity of Syria.

Meanwhile, ISIS has released a video purportedly showing captured Turkish soldiers being burned alive in a cage in the ‘Aleppo Province’, northern Syria. Access to social media platforms have been blocked in Turkey.