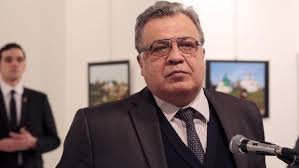 Following the killing of Russia’s Ambassador to Turkey, Andrey Karlov, on Monday, some voices in Russia responded immediately that it was a plot by the West to undermine the recent warming up of relations between Ankara and Moscow.

The Russian Foreign Ministry described the killing as “a terrorist act” but it is not expected to affect their ties with Ankara.

President Putin and his Turkish counterpart, Erdogan, have spoken on the phone and have reiterated their will to foster the ties between their countries.

Also, the two countries’ foreign ministers, in a telephone conversation, agreed on scaling up their efforts in fighting terrorism. Turkish foreign minister Mevlut Cavusgolu was expected in Moscow on Tuesday to discuss the Syrian crisis with his Russian and Iranian homologues.

The killing could reinforce Russia’s position in the UN Security Council with regards to the Syrian crisis as several Russian officials are claiming that the West played a part in the plot. Alexey Pushkov, former head of the foreign affairs committee of the Russian lower house of parliament, claimed the killing was a direct result of media “hysteria” concerning Aleppo, purveyed by “enemies” of Moscow.

Frantz Klintsevich, the deputy chairman of the upper chamber of the Russian Parliament’s defense and security committee, reportedly said the assassination was a “true provocation” and “a planned action.”

Meanwhile, head of the right-wing nationalist Liberal Democratic Party of Russia, Vladimir Zhirinovsky, said the killing was “a false flag operation by the West” to sabotage the rapprochement between Ankara and Moscow after a year-long tension just ended.

The Russian Ambassador to Turkey, Andrey Karlov, has been assassinated while giving a speech at the opening ceremony of a photo exhibition at an art gallery in Ankara.

The assassin, identified as 22-year old Mevlűt Mert Altintaş, is a Turkish police officer who was off-duty. His actions are believed to have been motivated by the war in Syria and Moscow’s support to Assad’s regime because he yelled “we die in Aleppo, you die here” before shooting the ambassador Karlov in the back repeatedly. The diplomat died from his wounds after he was rushed to the hospital.

Altintaş has been reportedly shot dead by security personnel on the ground.