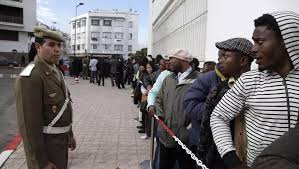 As the media is awash with reports on summary deportations in Algeria, Morocco stands out once again setting the example with the launch of the second phase of its genuine solidarity-based policy regarding sub-Saharan migrants, a ground breaking experience of migrant regularization and integration in Africa.

This second phase is meant to treat the remaining cases of migrants seeking regularization. The first phase ended in February 2015 with the regularization of over 25,000 migrants.

The sovereign’s decision is part of a comprehensive African policy that attaches particular importance to the human dimension alongside economic and political cooperation.

Before embarking on his African tour which led him to strengthen old friendships and establish new ones with west and eastern African countries, King Mohammed VI set out an African strategy where the human dimension takes pride of place.

“We attach as much importance to improving the livelihood of Africans in their countries as we do to African migrants in Morocco. As a result, they do not suffer the same hardships endured in many parts of the world,” the Moroccan Monarch made it clear in a speech last August.

The king added that Morocco “regularized the situation of migrants using fair and reasonable standards. It has provided the conditions needed for migrants to reside, work and lead a dignified life within our community.”