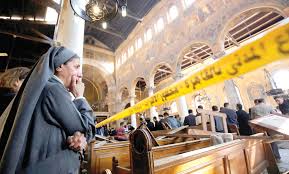 As Egypt mourns the death of at least 24 Coptic Christians killed in a bomb explosion on Sunday in a Coptic Orthodox Cathedral, the country’s orthodox church has called for unity while praying for the “martyrs and injured” and hoping that the “assailants” will “return to their conscience.”
The bombing which happened on Sunday is one of the series of attacks targeting Christians over the years. President Abdul Fattah al-Sisi noted that “vicious terrorism is being waged against the country’s Copts and Muslims” before stressing that the country “will emerge stronger and more united from this situation.” A three day national mourning period was declared by the president.
The attack was condemned globally and the President pledged that the authors would be hunted down and punished for their actions.
According to Member of Parliament Mohamed al-Ghould, Deputy Chairman of the parliamentary Human Rights Committee, the attack was executed with the help of foreign intelligence agencies saying it took place just two days after a bomb attack on a mosque in Cairo killed six security officers. That attack was claimed by a new group called Hasam while no group has claimed responsibility for the Sunday church bomb explosion.
The MP urged for the declaration of a State of Emergency to deal with the situation as well as the adoption of extraordinary decisions to prosecute terrorists in military courts. Coptic Christians make up about 10% of Egypt’s population.
Since the ousting of Morsi’s government in a military backed coup d’état in 2013, Egypt has been marred with bomb attacks targeting senior government officials, security personnel and religious gatherings.