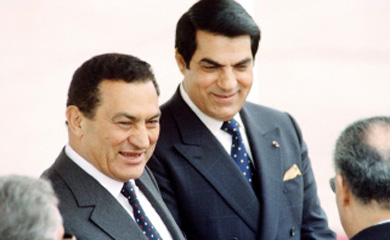 Swiss authorities Friday announced they will extend for one more year the freeze of assets of former Tunisian President Ben Ali and Egypt’s ousted President Hosni Mubarak in Swiss banks.

Initially slated to end in January and February 2017, Swiss authorities claimed they have decided to extend the freeze in order to obtain tangible progress with respect to procedures and clearer possibilities of repatriation of the assets.

Swiss authorities in 2011 imposed 3-year freeze of Ben Ali’s €55 million and Mubarak’s €529 million lying in Swiss banks. Both presidents were deposed the same year in the Arab Spring revolutions.

The Freeze of the Tunisian exiled leader’s asset was renewed for three additional years to end in January 2017.

Ben Ali and his entourage are also facing another ban from the EU. The 28-member bloc has also frozen $9 billion belonging to the autocratic ruler and his close entourage. The freeze was in February this year and will end next year in January.

For Swiss authorities the renewal will also allow more time for the ongoing criminal investigations, necessary for judicial cooperation.

Egypt and Tunisia have demanded return of the stolen assets.

The Swiss authorities’ decision also concerns the assets of ousted Ukrainian president Viktor Ianoukovitch whose €65 million in Swiss banks were frozen in 2014, the year he was deposed.

A review of the three cases will be conducted early 2018 before the end of the new extension, Swiss authorities said in a statement.

Around 1.8 billion Suisse Franc belonging to dictators of several countries have been repatriated back over a period of 15 years.