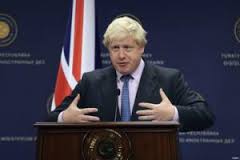 United Kingdom’s efforts to reinforce ties with members of the Gulf Cooperation Council (GCC) have been dealt a blow as reports that Foreign Secretary Boris Johnson criticized the council’s regional policies emerge as he prepares to tour the region in the coming days.

Johnson stated at a conference held in Italy last week that “there are politicians who are twisting and abusing religion and different strains of the same religion in order to further their own political objectives” in reference to Islam and its sects.

The British Foreign Secretary dubbed it as “one of the biggest political problems in the whole region” and highlighted it as the cause for “these proxy wars being fought the whole time in that area” which, he also lamented, lacks “strong enough leadership in the countries themselves.”

Regional crisis in the Middle East include Syria, Yemen, Lebanon and the Israeli-Palestinian conflict. Johnson held the “big characters” of the region responsible for the situation because of their unwillingness to “reach out beyond their Sunni or Shia” group. “That’s why you’ve got the Saudis, Iran, everybody, moving in and puppeteering and playing proxy wars.” he observed.

Number 10 Downing Street distanced itself from the comments stating that it is the Foreign Secretary’s personal opinion and not “the government’s position.” However, Boris Johnson continues to enjoy the “full confidence” of Prime Minister Theresa May who had assured the Gulf States of London’s determination and commitment to continuing confronting “State actors whose influence fuels instability in the region.” She had earlier on said that they must “work together to push back against Iran’s aggressive regional actions, whether in Lebanon, Iraq, Yemen, Syria or in the Gulf itself.”

Johnson will be delivering a keynote speech as part of the closing ceremony of the 37th Gulf Cooperation Council (GCC) Summit on Friday before going to Saudi Arabia on Sunday.

In a meeting between May and King Salman, at the beginning of the week, the British Prime Minister told the Saudi King that her government is committed to “enhancing and strengthening this relationship.”

Calls are already increasing for Boris Johnson to be given another portfolio to avoid embarrassing UK as well as hampering its ties with strategic allies.