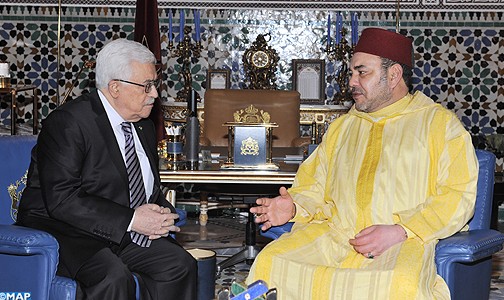 King Mohammed VI of Morocco, Chairman of Al Quds Committee, has renewed the North African Kingdom’s “constant and continued support for the historical, legitimate rights of the Palestinian people”.
In a message addressed to the Chairman of the UN Committee on the Exercise of the Inalienable Rights of the Palestinian People, on the occasion of the International Day of Solidarity with the Palestinian People, the Moroccan Sovereign underlined his country’s backing to the Palestinian people’s right “to establish their independent State on Palestinian territories, within the June 4th 1967 borders – a viable, sustainable State, with East Al Quds as its capital, living side by side with Israel in peace and security, in accordance with international legitimacy resolutions and the Arab Peace Initiative”.
He also called on the international community to “shoulder its responsibility towards the Palestinian People, particularly with regard to the unprecedented suffering they are experiencing as a result of the other party’s obstinacy, ongoing settlement policy and attacks against the holy shrines in Al Quds Al-Shareef, thus undermining the opportunities for a two-State solution”.
According to the Moroccan Sovereign, it has been unanimously agreed that to put an end to the Palestinian people’s crisis and eliminate the causes of instability in the region, affirming that “the only solution lies in the establishment of the Palestinian State on Palestinian land, as the outcome of direct negotiations between the Palestinians and the Israelis, according to a reasonable timetable and with international guarantees accepted by both parties”.
He expressed his full support for all initiatives moving in this direction and seeking to promote the Palestinian State’s capacity building, develop Palestinian national economy and enable civil society to play a major role in promoting peace and coexistence.
King Mohammed VI also said that if Israel presses ahead with its nibbling of land, its settlement policy, its embargo against Gaza, its violation of the sanctity of the Al-Aqsa Mosque and other holy shrines and its Judaization of East Al Quds, the peace efforts will be in vain and there will be a growing feeling among the Palestinian people and the international community as a whole that Israel is seeking to “impose a two-system State, in violation of nature, justice and human values”.
This will (…) will ultimately lead to “persisting tension, insecurity and instability in the Middle East region, in addition to deepening the feeling of despair which will fuel extremism, violence and terrorism”, warned the Moroccan Monarch.
As acting Chairman of the Organization of Islamic Cooperation’s Al Quds Committee, “I would like to tell anyone who is trying to ignore the holy city in any settlement efforts or to buy time to impose a new reality, that this will only exacerbate bitterness and stoke feelings of injustice”, said King Mohammed VI.
He also pledged to remain strongly committed to justice, security and stability, affirming that he will spare no effort to uphold Palestinian rights in the holy city, while defending its legal status through political, legal and diplomatic channels.
“I will mobilize all available means and mechanisms, including the Bayt Mal Al Quds, the operational arm of the Al Quds Committee, to carry out social and economic projects, support Maqdissis in their steadfast struggle and help them live decently on their land”, underlined the Monarch, noting that this will also contribute to safeguarding the human civilization heritage of the city, so that it remains a symbol of tolerance and coexistence between religions and cultures.