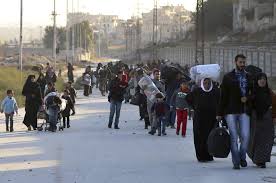 The Russian-backed Syrian army and allied militias are staging a brutal assault on the city of Aleppo to bring the rebels to their knees pushing approximately 16,000 people to flee the city.

“The parties to the conflict have shown time and again they are willing to take any action to secure military advantage even if it means killing, maiming or starving civilians into submission in the process,” said Stephen O’Brien, the United Nations undersecretary general for humanitarian affairs.

The besieged rebel-held areas have suffered a sustained campaign of indiscriminate shelling with Assad army launching a final offensive to crash the opposition before the new US administration takes office.

Once Syria’s largest city and its industrial and commercial hubs, much of Allepo now is reduced to ruins as a result of a four-year war with the government forces controlling the eastern part and the rebels the west.

On the backdrop of this surge in hostilities in Aleppo, the UN Security Council announced an emergency meeting to take place on Wednesday.

Divisions within the UN’s most powerful body continue to grow. France and Britain criticized Russia’s indiscriminate bombing of civilians in Syria and called for a cessation of hostilities by the Syrian regime. Moscow’s UN Ambassador Vitaly Churkin described such calls as a “propaganda campaign.

“In these tragic circumstances, France and its partners cannot remain silent in the face of what could be one of the biggest massacres of civilian populations since WWII,” French Ambassador to the UN Francois Delattre said.

US State Department spokesperson John Kirby ascribed the responsibility for the massacres in Aleppo to Moscow saying: “What we’ve continued to assert is that Russia bears the ultimate responsibility here for what the Syria regime is doing and being permitted to do in terms of the devastating civilian casualties and destruction of civilian infrastructure to include hospitals in and around Aleppo.”

The UN estimates that 400,000 lost their lives in the Syrian civil war which displaced more than half of the country’s population causing an acute refugee crisis in Europe never seen since the Second World War.