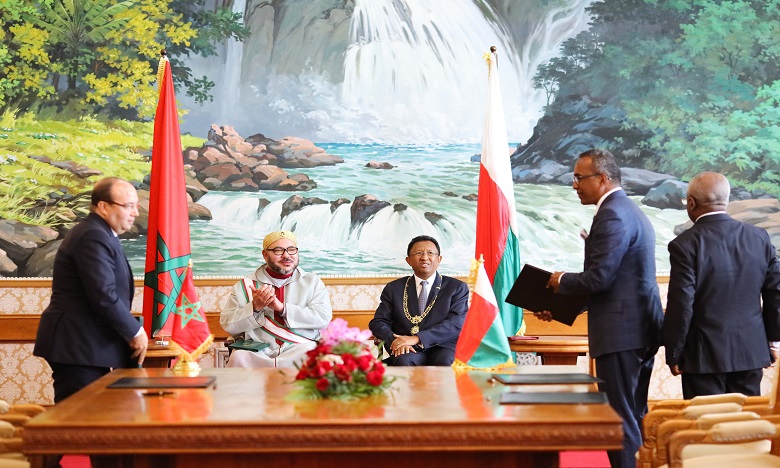 Foreign minister of Madagascar Atallah Beatrice Jeanine has hailed Morocco’s decision to rejoin the African Union (AU) and pledged to support the North African Kingdom’s bid to retake “its legitimate seat” within its African institutional family.
Mrs Beatrice made the remarks in Antananarivo on the occasion of the official visit King Mohammed VI is paying to Madagascar within the frame of a new African tour to bolster Moroccan-African partnership and foster further South-South cooperation.
Madagascar top diplomat said that “President Hary Rajaonarimampianina has responded favorably to the letter sent to him by Head of the Union African Commission Nkosazana Dlamini-Zuma on Morocco’s bid to rejoin its African institutional family”.
Tanzania, Ethiopia and Rwanda, which were visited lately by the Moroccan Sovereign, also backed Morocco’s return to the AU. During the latest African Summit held in Kigali (Rwanda), 28 African member countries out of 54 submitted a motion welcoming Morocco’s application to rejoin the African Union, noting that the North African country is one of the founding members of the AU’s predecessor, the Organization of African Unity (OAU.) Panama Canal.
President Hary Rajaonarimampianina, who held Monday in Antananarivo tête-à-tête talks with King Mohammed VI, underlined the importance of the royal visit to his country, saying “this is the first visit by the Moroccan King to Madagascar, a visit which has a strong symbolic meaning”.
The royal trip will give new momentum to the friendship ties existing between the two countries, added the Malagasy president, recalling Morocco’s special ties with Madagascar, notably the city of Antsirabe, which had welcomed late King Mohammed V and the royal family during their forced exile in 1954.

After the warm welcome of the Moroccan Sovereign by the Malgasy president, government and people, the two African Heads of State held private talks and exchanged the highest honorary distinctions.
Afterwards, the two leaders chaired the signing ceremony of twenty-two bilateral cooperation agreements. These agreements seek to enhance partnership in agriculture, banking, civil service, youth, sports, taxes, renewable energy, education and vocational training.
Morocco, which chairs COP22, pledged on this occasion to help Madagascar upgrade and preserve the Canal of Pangalanes, a 700- km long waterway which is four times longer than the Suez Canal and eight times longer than the Panama Canal.
Morocco is banking in this regard on its experience accumulated in revamping and restoring Cocody Bay in Ivory Coast, a landmark project and best illustration of the South-South cooperation.