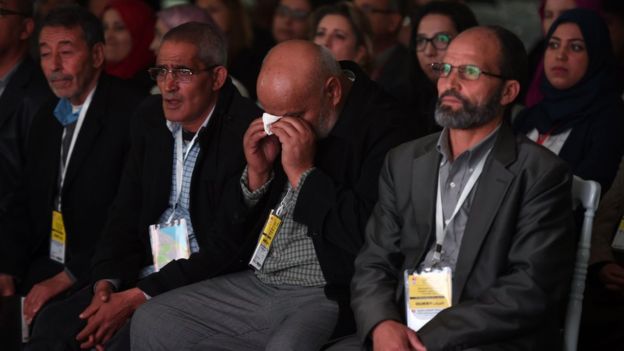 The first public hearings of the serious and systematic human rights violations that took place in Tunisia between 1 July 1955, when Tunisia became independent, and 31 December 2013, when the country’s new Transitional Justice Law came into force have begun. President Sihem Ben Sedrine of the Truth and Dignity Committee (IVD) said it is “a landmark event in the history of Tunisia” signaling that “Tunisia will no longer tolerate violations of human rights.” She added that they “need to expose these testimonies for history” while pointing out that “the goal is not revenge.” The accused perpetrator must be the state, or persons acting on its behalf or under its protection.
The first hearings began on Thursday evening at the Elyssa club where the former first lady, Leila Ben Ali, used to hold her private evenings. President Sedrine said it was a symbolic choice inspired by the German experience that judged Nazis in the key places of Nazism. She stated that “it is legitimate today to question the transfer of state institutions into a terrible tool of dictatorship” to facilitate the process of reconciliation because “the Tunisian people are tolerant, but they are tolerant after knowing the truth.” Sihem Ben Sedrine, a former activist, was also a victim of harassment under President Ben Ali’s rule.
More than 65,000 complaints were received by the IVD and it held around 12,000 hearings to gather its testimony. The commission is optimistic that the public hearings could boost investment “because foreign investors will know that Tunisia is implementing a path for transitional justice aimed at dismantling its authoritarian and corrupt system.” The next hearings are scheduled for 17 December and 14 January to commemorate the outbreak of Tunisia’s 2011 uprising and the flight of Ben Ali to Saudi Arabia respectively. At the December session, officials accused of human rights violations, torture or corruption are expected to present public apologies.
The London-based BBC reported that victims that it spoke to “have demanded financial compensation and say the accused should be held accountable in court.”