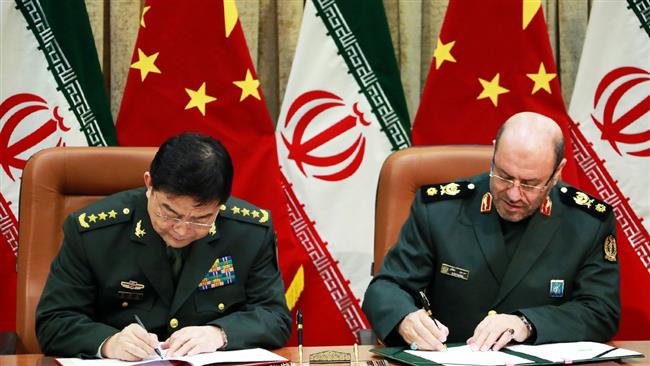 Iran and China signed a military agreement that would help to “create a collective movement” against terrorism and serve as an “upgrade in long-term military and defense cooperation” between them and in their joint military exercises. Signed by defense ministers General Hossein Dehqan and Chnag Wanquan of Iran and China respectively, the deal was described as a sign of increasing confidence and friendly ties in the cooperation between the two countries according to Chinese state-run Xinhua news agency.
Dehqan said “enhancement of cooperation with China is a top priority” in Tehran’s “defense diplomacy” that also includes a broader exchange in “equipment and technology” as promised during President Xi Jinping’s official visit to the country at the beginning of the year. He lamented that the region has been turned into a “hotbed of conflict and insecurity” due to “foreign interference and disrespect for national sovereignty” leading to a “spread of terrorism around the world.” The Iranian defense minister hinted that Tehran is eyeing honest and effective cooperation with other States to “create a collective movement to deal with this threat” and it is expecting that China has “a very important role” to play.
China has often maintained a neutral foreign policy in defense and political matters while pursuing its economic agenda but since the shift of attention of the outgoing Obama administration to the Pacific from the Middle East, Beijing has embarked on strengthening its military and political ties with countries in the Middle East and North Africa. Iran is reportedly interested in acquiring 150 of China’s Chengdu J-10 fighters in a deal worth around $1 billion.
Observers have stated that the signing of the agreement is part of preparations to the incoming president-elect Donald Trump administration considering that he has promised, during his campaign, to sideline the Nuclear Agreement reached between Iran and the so-called P5+1 terming it as “the stupidest deal of all time” and “a one-sided transaction where we are giving back $150billion to a terrorist state.” Trump had also accused China of “raping” the US economy and had threatened to impose a 45% taxation of their imports.