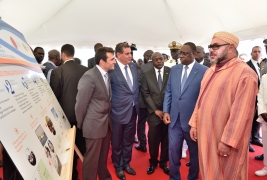 Morocco and Senegal have inked several cooperation deals meant to bolster partnership between the two countries in the fields of agriculture, fisheries and other socioeconomic sectors.

These cooperation agreements were signed in Dakar Monday and Tuesday under the co-chairmanship of King Mohammed VI and President of Senegal Macky Sall.

The two leaders held talks on bilateral relations and latest developments on the regional and international scenes.

In this vein, King Mohammed VI, who started his currently official visit to Senegal Sunday, and his host President Macky Sall launched an octopus development plan in favor of Senegal. On this occasion, the King handed Senegalese authorities 12 inflatable boats for rescue operations and monitoring of fishing activities, donated by Morocco.

The octopus development plan, to be conducted in five stages, is mainly aimed at the preservation and protection of the species and the replenishment of stocks.

The facility, reflecting the two countries’ common vision to share know-how and expertize, will offer technical training on the creation of enterprises to 300 young people a year and will assist 100 young people carry out their projects. It will also provide training on tourism trades to 100 students annually, in a first phase.

The two leaders later on headed to Dakar Hospital where King Mohammed VI donated to the Senegalese National Council for the fight against AIDS 1.6 tons of medicines for the treatment of opportunistic diseases and infections caused by AIDS/HIV. The donation is offered by the Mohammed VI Foundation for sustainable development.
The gesture mirrors the Moroccan Monarch’s keenness to contribute to the progress and prosperity of the brotherly people of Senegal, the improvement of the health and living conditions of vulnerable social strata and the creation of necessary conditions for achieving sustainable human development.
On the sidelines of the royal visit, the two countries’ carriers are also exploring partnership and joint business opportunities.

The visit of King Mohammed VI to Dakar was marked by the speech he delivered on Sunday on the occasion of the 41st anniversary of the Green March.

In this historic and unprecedented speech, the Moroccan Sovereign said he chose to address the Moroccan people from Dakar because Senegal was one of the countries that took part in the Green March, together with other African and Arab nations.

“This beloved country has always been at the forefront of advocates of the Kingdom’s territorial unity and lofty interests”, said the Monarch, noting that this country considers the cause of the Moroccan Sahara as one of its own national causes.

“I have also chosen Senegal because of the special status it enjoys in Africa, thanks to its historically democratic model, its political and social stability, as well as its economic dynamism”, added King Mohammed VI.

He also said that “there are also fraternal bonds, based on solidarity and a shared destiny, which have historically existed between the Moroccan and the Senegalese peoples, who stand as one single people, with each one forming a natural extension of the other, in a unique symbiosis between two independent countries respecting each other’s particularities.
And all the agreements inked and projects launched during this visit to Senegal, confirm, if need be, the sovereign’s continuous commitment to an active and solidarity-based south-south cooperation.