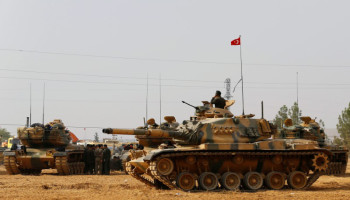 Prime Minister Haider Al-Abadi warned Turkey that “if they enter” Iraqi territory with their convoy of 30 tanks and other heavy artillery recently deployed to the Turkish border town of Silopi, Iraq would be “ready to face them” and defiantly stated that “any invasion of Iraq would lead to the dismantling of Turkey.”

However, Ankara has downplayed Baghdad’s concerns saying that its military move is a precautionary measure, deploring Abadi’s words as “overstepping the mark.”

Turkey’s Deputy Prime Minister Numan Kurtulmus said the Iraqi Prime Minister “must make statements lowering the tension.” He claimed that the deployment is “more of a precaution than a threat” because Ankara has to “take measures to guard against threats from across Turkey’s border.” Turkey shares a 350 kilometer long border with Iraq.

Some Turkish forces are already stationed in Iraq around the Basiqa military base for the past several months and Baghdad’s request for their departure had led to a war of words between the two governments.

Abadi, during his latest warning to Turkey on Tuesday, pointed out that the “door of diplomacy” remains open despite being ready for any eventual circumstances that may arise with their neighbors.

Turkey’s Defense Minister Fikri Isrik claimed that “important developments in the region” have led to the deployment because they are “preparing in advance for whatever happens” and the latest move is “one element of that.”

Meanwhile, Turkish Foreign Minister Mevlut Cavusoglu made fun of Abadi’s warnings questioning his strength when he “cannot even fight against a terror organization” asking why he ‘surrendered’ Mosul to terror organizations and allowed the Kurdistan Workers’ Party (PKK) to continue ‘occupying’ its lands. He described the Iraqi prime minister as “weak.”

Such remarks will in no way defuse tension between the two neighboring countries.