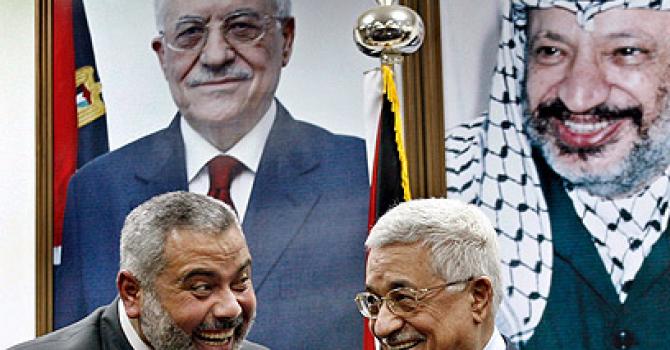 President Mahmoud Abbas of the Palestinian Authority (PA) met with Khaled Meshaal, Chief of Hamas political bureau, and Ismail Haniyeh who serves as the movement’s leader in Gaza on Thursday in Doha at a “business luncheon” hosted by Qatar’s Foreign Minister Khalid bin Mohammad al-Attiyah.

The very rare gathering of the three Palestinian officials was also reportedly attended by Secretary General of the Palestine Liberation Organization Saeb Erekat and Palestinian Ambassador to Qatar Munir Ghanam.

A statement released after the luncheon highlighted that Fatah and Hamas have agreed to protect the “Palestinian national project” that Israel wants to destroy by rendering the two-state solution impossible. They also stressed that “there is no Palestinian state in Gaza, and no Palestinian state without Gaza,” according to Wafa news agency controlled by the PA.

Reconciliation plans were also discussed with calls for the implementation of the past agreements made in this respect between Hamas and Fatah with the hope of establishing a consensus government before heading to the polls for elections. A unity government formed by the two groups in April 2014 failed in June 2015 and one of the key issues for their discord was who should be paid government wages as civil servants. Hamas in a statement earlier this week said it was willing to hold discussions with any Palestinian faction if the conditions are “suitable for the success of reconciliation and ending the division.”

Effort to confront Israel’s occupation and aggression in unison under a single Palestinian umbrella was also discussed. Hamas Spokesman Hazem Kassem had twitted that “achieving Palestinian reconciliation and ending division is a strategic goal of Hamas.”

Several efforts led by Egypt, Qatar and Turkey to reconcile Hamas and Fatah have failed but there are hopes that the rare business luncheon held in Qatar presents a new opportunity even though President Abbas was lately criticized by Hamas for showing “contempt for the blood of martyrs and the suffering of the Palestinian people” when he sent a condolences letter to Peres’s family and attended his funeral ceremony.