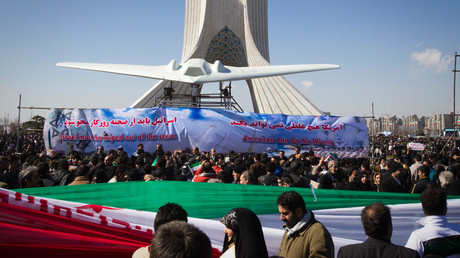 Images of an Iranian made two-wing propelled drone capable of accomplishing missions both on sea and on land has been published by Tasmin news agency, a media house close to the Iranian military. The hardware is being hailed as a “suicide drone” by the country’s Revolutionary Guards because of its capability to hit targets with its “heavy payloads of explosives” as well as “launch suicide attacks.”

Amir Ali Hajizadeh, head of the aerospace arm of the Revolutionary Guards, said the long-range drone which has a range of 1,000 kilometers and a flight time endurance of 4 hours is “capable of hitting four targets with smart precision-guided bombs with high accuracy.”

The new drone is expected to be mostly used for maritime surveillance purposes but would pose a major concern to other navies. The statement released by the military claimed that “flying at a high cruising speed near the surface of the water”, which could be as low as 50cm above the water to avoid detection, “the aircraft can collide with the target and destroy it, either a vessel or an onshore command center.” The drone boasts a speed of around 250km per hour and rises as high as 900metres and yet still capture clear images at night and in damp sea conditions with its advanced camera.

Images of the drone in the sky were not released but the latest innovation adds to Tehran’s domestically developed military hardware. Since capturing a US RQ-170 Sentinel surveillance drone in 2011 in a proclaimed cyber warfare, Iran has used the reverse-engineering technique to produce its own drones adapted to its need.