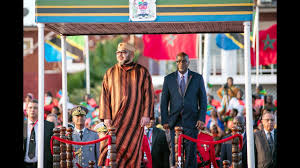 After his successful visit to Rwanda, King Mohammed VI started Sunday an official visit to Tanzania, 2nd leg of an African tour that will lead the Sovereign also to Ethiopia. This important trip to Eastern Africa aims to give a new impetus to cooperation between the North African Kingdom and these three English speaking countries.

The Sovereign’s visit to Tanzania will open a new era in the political and economic relations between the two African countries. Several cooperation accords will be signed in the fields of finance, agriculture, tourism, banking, insurance, infrastructure, energy, education, investments etc.

Q2’s solid performance is due to the Tanzanian government’s investment and infrastructure policy, which has made the gold-producing and natural gas-rich country more resilient to the commodities slump than most of its regional peers.

Tanzanian media welcomed the royal visit to Dar es-Salam as opening a new era in bilateral relations and lauded the Kingdom for reaching out to eastern Africa, part of the Moroccan Sovereign’s endeavors to build up strong inter-African relations and promote African integration.