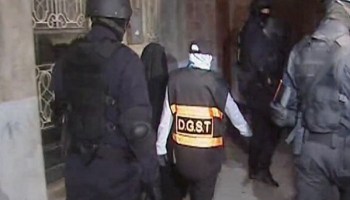 Moroccan security services have announced Wednesday the arrest of two jihadists linked to ISIS terror organization. They were operating in the northern cities of Tetouan and Fnideq.

According to the Moroccan Interior Ministry, the arrest of the two militants, made in coordination with Spanish police, comes after their two accomplices living in Spain were captured within the frame of Moroccan-Spanish strategic security partnership.

Last week, Moroccan authorities nabbed 10 women linked to the Islamic State group. They were planning suicide attacks and trying to recruit other women to join the extremists.

Morocco’s Central Bureau of Judicial Investigations (equivalent of the US FBI) dismantled the cell of women extremists, in operations in eight towns. Chemical products seized at the home of one of the suspects can be used in explosives.

The women declared allegiance to IS, and some have family ties with Moroccan IS fighters in Syria or Iraq. The dismantling of this cell is part of the tireless war waged by Moroccan authorities against Islamist extremists and fanatics.

As the international coalition intensified its airstrikes against the terrorists in Iraq and Syria, the extremist group started moving to North Africa and particularly to Libya where the jihadists have enhanced their influence and presence.

In 2015, Morocco’s counterterrorism efforts mitigated the risk of terrorism but the country continues to face threats, largely from numerous small, independent violent extremist cells. Moroccan authorities have dismantled multiple groups with ties to international networks that include ISIS and Al Qaeda in the Islamic Maghreb (AQIM).