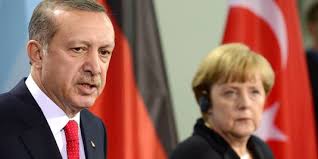 Germany closed its embassy, consular services and schools in Turkey on Thursday until September 16 as a precautionary measure because of fears of reprisals after Der Spiegel in its Tuesday issue published a cover photo of President Erdogan with the heading “The Dictator” and “A country loses its freedom.”
Ankara reacted through spokesman Tanju Bilgic of the Foreign Ministry who described it as an “extremely provocative” issue meant to “create a negative perception, not only about Turkey but also Islam.”
The featured picture of the Turkish president showed him wearing sunglasses with the reflection of two mosques on it. The minarets of the said mosques were distorted into lifting-off rockets thereby triggering strong criticism.
Bilgic condemned the newspaper’s “attempts to smear a president democratically elected” and stressed that the Tuesday’s issue is a “new manifestation of the distorted and prejudiced mindset that aimed to corrode” the country’s image after the July 15 coup attempt that led to a major crackdown on alleged loyalists of Fethullah Gulen.
Berlin has not commented on the matter. Diplomatic relations between the two countries have soured over the past months.
The closure of the German embassy, consular services and schools is linked to information about a contingency attack, according to Bild. This is not the first time the Germans have closed the embassy. Back in March, the school and embassy was closed following a terror threat warning that was “not conclusively verifiable.”