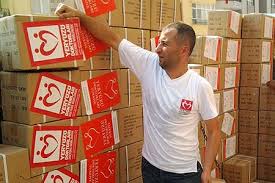 State-owned Syrian Arab News Agency (SANA) has quoted a Foreign Ministry source saying that Damascus will not allow aid from other countries into Syria without coordination with the Syrian government and the UN.

Turkey is planning to deliver humanitarian aid to Syria after violence was suspended on Monday afternoon under the Russian-US brokered ceasefire but the Syrian regime has already laid down conditions for their delivery.

“Since the very beginning of the crisis in Syria, Turkey has always provided support to the armed terrorist organizations and supplied them with money, arms, not to mention harboring terrorists, assisting them and bringing mercenaries from all over the world to murder the Syrian people and destroy their country,” the source stated.

The source further claimed that Ankara’s “intention is to send material disguised as humanitarian aid to Aleppo city” and “no matter who provides them (humanitarian aid)” will be rejected “without coordination with the Syrian government and the UN.” Turkey and Syria have been at odds since the beginning of the war and it is not surprising that the Syrian government is suspicious about Turkey’s actions.

Around 40 lorries are on the border waiting for Damascus’s approval to continue their journey into Syria and spokesman David Swanson of the UN Office for the Coordination of Humanitarian Aid (OCHA) said 20 trucks are “ready to go” if they get the green light.

He lamented that “things are taking longer than we’d hoped.” Swanson deplored that the delivery of aid is being politicized by “some groups” to “gain political mileage… and this is something we need to put aside.”

Many are hoping that the ceasefire will help to ease the dire need for humanitarian and relief aid as most of the civilian population in rebel-held Aleppo has been living under siege. The city could be dubbed as one of the most bombed cities in the Syrian war as its infrastructure has been reduced to ruins.