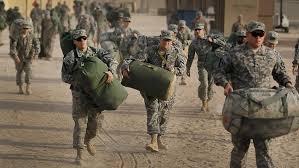 Colonel John Dorrian, a spokesman for the US-led coalition, revealed that US troops have increased from around 4,000 to 4,460 within a week as Iraqi forces continue “shaping operations” for the assault on Mosul, the capital of the self-declared Islamic State (IS) in 2014. He didn’t clearly state if their arrival is linked with the preparations but explained that the deployments had been authorized earlier in the year. There are an estimated 3,000 to 4,500 IS fighters and the US official thinks that they are not all “hardcore” fighters committed to die in battle.

The battle for Mosul is considered as the one of the most important battles in defeating IS in Iraq and Lieutenant General Stephen Townsend, the new commander of the US-led coalition, seems prepared for it. “We’re preparing for a hard fight, a long, difficult fight” he told the Wall Street Journal on Wednesday but expects “the hardest-core fighters who will essentially die in place” to be around one-third of the extremist group’s fighters. Although he said the assault could be launched next month, Spokesman Dorrian on Thursday said the Iraqi authorities will determine when it will begin.

The Iraqi army is stationed 60 kilometers south of Mosul while Kurdish forces have surrounded the northern, eastern and northwestern part of the city. The Qarrayah airbase that was retaken several months ago is expected to serve as the base for the assault.