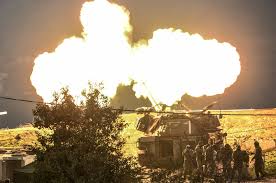 The Israeli military stated that its warplanes struck the Syrian Armed Forces overnight after an armed projectile fired from Syrian territory landed in the Golan Heights that it is controlling.

It claimed that the projectile fired by the Army’s mortar launchers did not cause any casualty. Israel has maintained the policy of reciprocity in the Syrian war whenever an armed projectile lands on its controlled-territory but has been cautious not to be dragged into the war. Damascus has not yet reacted to the incident.

Tel Aviv is believed to have on several occasions targeted military installations or shipments destined for the Assad regime because it fears that it could land into the hands of its enemies such as Hezbollah in Lebanon. However, Israeli authorities have neither confirmed nor denied carrying out military operations in Syria but Hezbollah, fighting on the sidelines of the Pro-Assad forces, holds it responsible for airstrikes that has killed some of its militants in the war torn country.

The Golan Heights is still a disputed area between Damascus and Tel Aviv.

Thursday’s incident is the second one within five days after a mortar shell from rebel factions landed in the area on Sunday. A U.N. peace keeping force has been stationed in the area following the signing of a truce in 1974.

Israel captured the Golan, a strategic plateau, from Syria in the 1967 Middle East war and annexed it in 1981 but its authority in the area is not internationally recognized. Syria tried to retake the region during the 1973 Middle East war but despite Israeli forces facing heavy losses, it failed to progress.