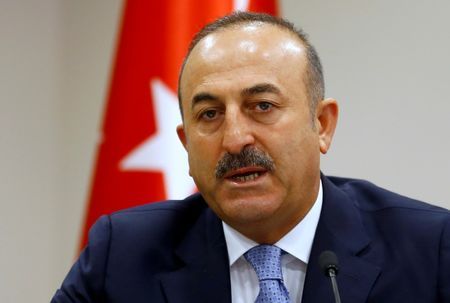 After the members of the Syrian High Negotiations Committee (HNC) held a meeting with their supporters in London, Turkish Foreign Minister Mevlut Cavusoglu said the ‘Vision for Syria’ plan unveiled by the opposition coalition is “realistic, but countries that support Assad must see this too.”

Ankara has been insisting on the departure of Assad to end the war in Syria and Cavusoglu reiterated that “to accept Assad means the continuation of conflict and chaos.”

HNC’s plan calls for a six month temporary truce and humanitarian aid that would lead to an 18-month transitional government body and the end of Assad’s regime before constitutional reforms and UN-supervised elections take place. The HNC leader Riyad Hijab said “if what the Russians and the Americans agree upon is very much different from what the Syrians aspire to, then we shall not accept it.” He stressed that “there cannot be a solution in Syria unless it is a solution that satisfies the aspirations of the Syrian people.”

Minister Cavusoglu said the important thing is that “these plans can be implemented” and “that is why we cannot remain stuck upon one person and we must instead discuss Syria’s future.”

Turkey has launched an offensive targeting Kurdish forces and the Islamic State in Syria close to its border. According to Cavusoglu, Ankara intends to extend its operation to Raqqa and Mosul; headquarters of the extremist group in Syria and Iraq respectively. He claimed that mounting such an operation is necessary “if we want to cleanse Syria and Iraq of Deash….We have always said that if we do not support local forces on the ground, if there is no land operation, it will not be possible to eliminate or even stop Daesh exclusively from the air.”

Turkey is not part of the U.S.-led coalition but has been carrying out airstrikes on targets that it considers a threat to its national security. As the country increases its role in the Syrian and Iraqi war, the foreign minister called on other countries to help train and arm local forces.