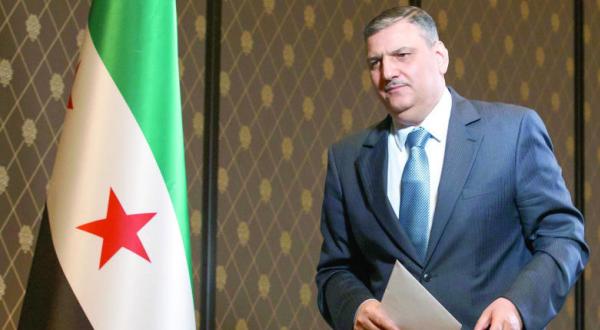 “If what the Russians and the Americans agree upon is very much different from what the Syrians aspire to, then we shall not accept it,” leader of the High Negotiations Committee (HNC) Riyad Hijab stated.

The former Syrian Prime Minister who defected to join the opposition as the contestation against the Assad regime gained momentum in 2012 outlined a three point transitional plan while emphasizing that “it’s not a question of keeping Assad in for six months or one month or one day, in this transitional period” affirming that “the Russians and Americans know that.”

The plan entitled ‘Vision for Syria’ recalled that the Geneva Communiqué of 2012 should serve as the basis for discussions to reach a temporary truce, lift sieges, allow humanitarian access and release detainees within a period of six months. The next step would be an 18-month long transitional period with the establishment of a transitional governing body with full executive powers. This body will also mark the end of the Assad regime and departure of senior officials accused of committing “heinous crimes.” The process will be accompanied by a constitutional reform to pave the way for the final stage concerning its approval, the implementation of the outcome of the national dialogue and holding UN-supervised elections.

Hijab reminded global and regional powers engaged in the Syrian war that the Syrian people “have sacrificed a lot and they will not give up this demand” as their “position” is known. “There cannot be a solution in Syria unless it is a solution that satisfies the aspirations of the Syrian people.”

In the past, President Assad has ruled out stepping down from power after being reelected for another seven-year term in 2014. The elections were held in government-controlled areas and were heavily criticized by opposition figures in exile as a farce.