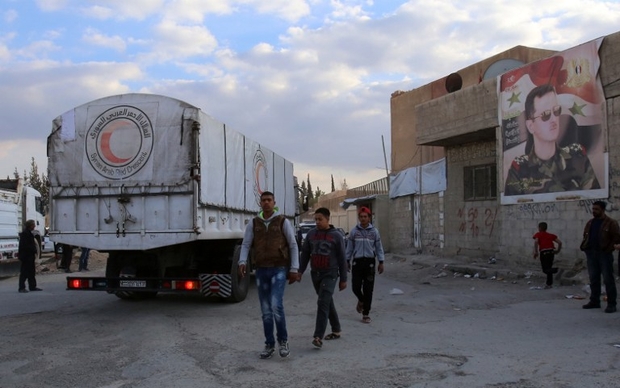 Evacuation of civilians from Daraya to government held areas and rebels to the rebel controlled territories is underway as aid convoys arranged by the Red Crescent entered the city on Friday ending the four year siege.

Daraya is strategically located and is one of the first towns to have protested against the Assad regime in the start of the Arab Spring. Its recovery by the government will serve as a symbolic victory but it could be a morale booster to the rebels who were able to hold on despite the siege.

Ajnad al-Sham and Martyrs of Islam are the two groups that had control over Daraya with a total of 800 fighters but they will be given a pathway to join the Army of Conquest, their ally, in northern Idlib. A council member of the city said “civilians are forced mainly to go to the regime-held areas” but said this can only be confirmed when the first group of civilians leave.

Osama Abu Zaid, legal consultant to the Free Syrian Army, hailed the fighters as courageous “heroes” before scolding the international community for doing “nothing” to end the siege and the UN for failing to provide any humanitarian aid until June.

Hussam Ayash, an activist in the town, said the deal with the government is understandable because “our condition has deteriorated to the point of being unbearable” after four years of siege.

The control of Daraya would serve as an advantage to pro-Assad forces because it is not far from the Mazzeh military airport. The town was used by rebel groups as a connection hub between western and eastern Ghouta.