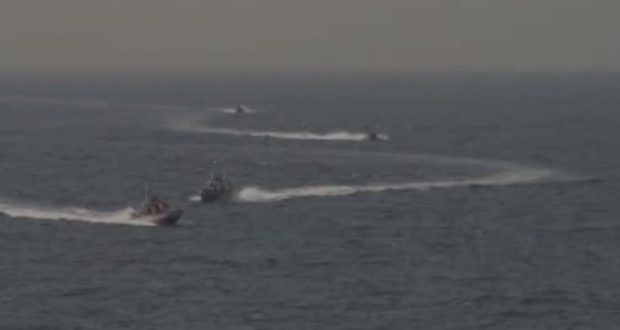 Tension between Iran and the U.S. is rising following incidents in the Strait of Hormuz between their naval forces. US officials said that the USS Nitze, a destroyer, was “harassed” on Tuesday by four of Iran’s Islamic Revolutionary Guard Corps vessels coming close to it by 300 yards and that the USS Squall patrol had to deal with a similar situation on Wednesday before firing three warning shots from a 50 caliber gun.

Iranian defense minister Hossein Dehghan defended the actions of the Iranian navy and stressed that “if any foreign vessel enters our waters, we warn them, and if it’s an invasion, we confront” according to the semi-official Tasnim news agency.

Pentagon spokesman Peter Cook said the USS Squall felt “compelled ultimately” to fire warning shots because efforts made to “de-escalate this situation” were unsuccessful. He said the maneuvers of the Iranians are “unsafe, unprofessional and not routine.”

Spokesman commander Bill Urban of the US Navy’s 5th Fleet said the incident, which took place on Wednesday, “presented a drastically increased risk of collision and the Iranian vessel refused to safely maneuver in accordance with internationally recognized maritime road rules.” The Iranian vessels didn’t respond to the radio calls of the US ships.

A senior Pentagon official said the Squall and the USS Tempest were operating with a Kuwaiti Navy ship when the incident occurred and at certain point, one of the Iranian vessels passed between the two U.S ships.

Tehran has threatened in the past that it could close the strategic Strait of Hormuz, which is an important passage for oil and gas. Iran has developed small speed boats for its navy which it believes are easily handled and swifter than the warships of other countries that patrol the area.