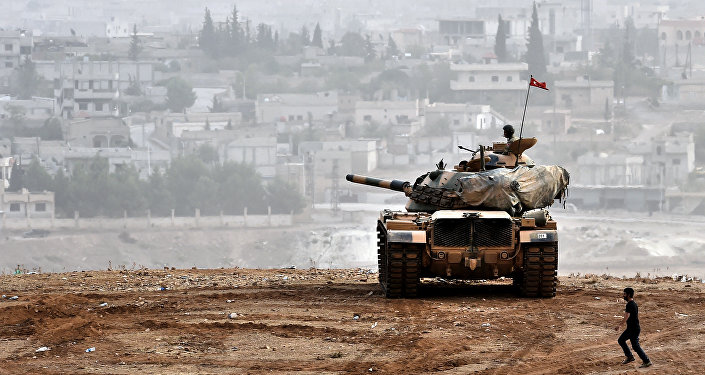 Turkey launched on Wednesday a military operation baptized Euphrates Shield aimed at eliminating threats posed by militants of the Islamic State and Kurdish fighters from the northern Syrian town of Jarbulus close to its border.

The operation has been condemned by the pro-Kurdish People’s Democratic Party, which stated that Turkey should “abandon its anti-Kurdish stance in Syria” and “should not meddle in Syrian affairs by military means.”

Defense minister Fikri Isik said Ankara has no plans to halt the operation as he stressed that the Kurdish fighters “must move to the east of the Euphrates (river).” He warned that if the kurds fail to adhere to the request, “Turkey has every right to intervene” in neighboring Syria militarily. He hinted that the condition was based on a prior agreement with the U.S. which is leading the international airstrike campaign against IS.

U.S. Vice President Joe Biden, who was on a visit to turkey Wednesday and who met with President Erdogan, also urged Kurdish fighters to stay on the eastern part of the river if they want to continue enjoying Washington’s support.

There are reports that the Kurds have already started to desert the eastern part of the river but Ankara demands that they should leave within a week.

Spokesman Redur Xelil of the People’s Protection Units (YPG), a Kurdish militia group, told AFP that they are not worried about the operation because its fighters “are Syrians and they are present on Syrian land” before adding that “Turkey cannot impose restrictions on the movements of Syrians on their land.” YPG cooperates with NATO to fight IS on the ground but Turkey is wary of the group’s intention to establish an independent Kurdish state or at least an autonomous region in Syria.

Turkey considers such an ambition detrimental to its national security.

The US Vice-President’s visit was aimed at reassuring Ankara that Washington is committed to its NATO ally.