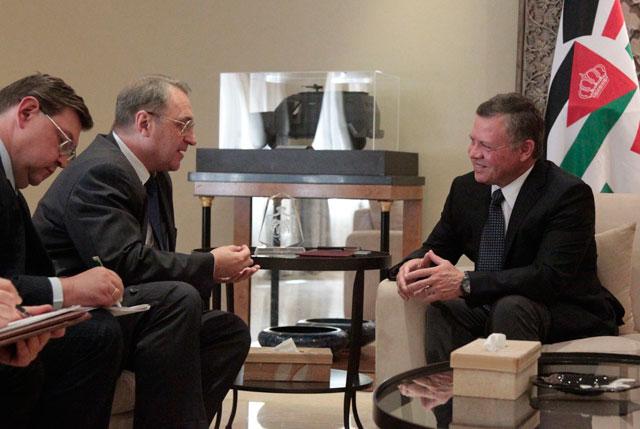 Russia’s Deputy Foreign Minister Mikhail Bogdanov who also doubles as President Putin’s special representative for the Middle East and Africa met with King Abdallah of Jordan on Thursday to discuss the Syrian crisis.

The Russian official also met Prime Minister Hani al-Mulki for talks on developing the multidimensional cooperation between Moscow and Amman.

A statement from the Russian Foreign Ministry stated that the two parties “confirmed their commitment to a political settlement of the Syrian crisis on the basis of decisions of the International Syria Support Group (ISSG) and the relevant resolutions of the United Nations Security Council.”

Russia’s engagement in Syria is to defend the Assad regime while Jordan joined the civil war as an act of revenge for one of its pilot that was captured and killed by militants of the Islamic State.

During the discussions, emphasis was made on “the need to strengthen the cessation of hostilities and resolve urgent humanitarian issues, including the problem of Syrian refugees in Jordan,” the statement from Moscow said.

The meeting took place after Jordan was criticized in a 97-page report released on Tuesday by Human Rights Watch (HRW.) The report enumerated a series of obstacles and restrictions faced by Syrians in the Hashemite Kingdom especially the right to education. The Minister of State for Media Affairs Mohammad Momani replied that “no country has offered what we have to Syrian students, in spite of our limited resources and the insufficient support we receive.”

Bill Van Esveld, senior children’s rights researcher at HRW, acknowledged that “Jordan has taken difficult, noteworthy steps” to school Syrian refugees. Yet he believes that authorities should “remove policy barriers that are keeping children and youth out of school.”

Momani said although Jordan received only around 5.5% of the $1 billion pledged by donors, it continues to uphold its “moral duty” with schools working double shifts to accommodate Syrian students.

The influx of Syrian refugees to Jordan has been of major concern to the authorities as they struggle to help them begin a new life.