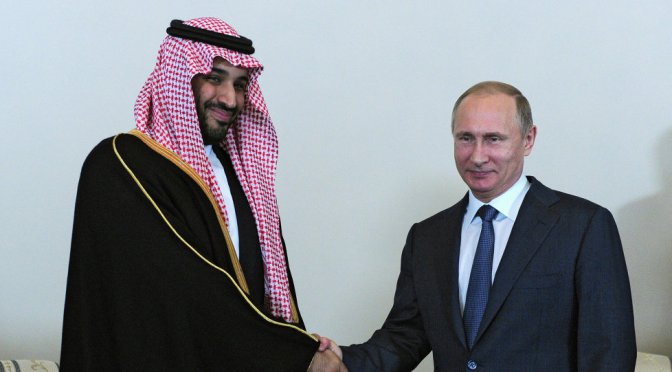 Major oil producers could be on the verge of reaching an agreement to stabilize the oil market and boost prices. Russian energy minister Alexander Novak said there are consultations between Riyadh and Moscow and they are “ready to achieve the widest possible level of coordination… and put in place joint measures to achieve oil market stability, with the condition that these measures will not be for a limited period of time.”

The revenue generated from oil plays a crucial role in the economies of both countries and Novak said dialogue between them “is developing in a tangible way” in bilateral and multi-lateral aspects. “We are cooperating in the framework of consultations regarding the oil market with OPEC countries and producers from outside the organization, and are determined to continue dialogue to achieve market stability.”

The recent statements made by Russian and Saudi officials over the past few days have led to a rise in oil prices from $42 a barrel to $45. They are among the world’s largest producers with an output of 10.85 million barrels a day of crude oil and 10.67 million respectively.

At the beginning of the year, an initiative to freeze production at January levels failed after Iran rejected the idea because it wants to reach its pre-sanction levels. The talks, which included Qatar, Venezuela, Russia and Saudi Arabia, failed after Riyadh stressed that Tehran must abide by the proposal if an agreement is to be reached.

Iran is yet to react to efforts to revive the talks although Saudi’s energy minister Khalid al-Falih said last week that they are willing to work with OPEC and non-OPEC members for the stability of the oil market.

Oil producing countries will be meeting in Algeria at the end of next month for the International Energy Forum (IEF) and they are expected to discuss oil prices on the sidelines of the meeting that assembles producers and consumers.