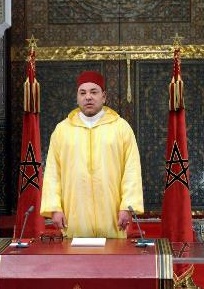 At a regional context marked by turmoil and at a time conspiracies against Morocco are increasing, King Mohammed VI has called for more mobilization and vigilance and for coordination between security departments, at home and abroad.

“At a time of mounting security challenges and increasing conspiracies hatched against our country, I call for more mobilization and vigilance,” said King Mohammed VI in a speech he delivered on the occasion of Throne Day, marking this year the 17th anniversary of his enthronement.

“Maintaining order is a major responsibility, which is not limited in time or space, and a great mission incumbent upon all of us,” the monarch said, stressing “the need for coordination between security departments, at home and abroad, as well as with the Royal Armed Forces, with all their components, and with citizens, as all bear responsibility when it comes to national causes.”

“The security of Morocco is a national duty that leaves no room for exceptions. It should not be the subject of any trivial disputes, complacency or leniency. It requires positive competition to safeguard the unity, security and stability of the nation,” said the king.

In this vein, he expressed consideration to the various security services for their tireless efforts and major sacrifices when fulfilling their national duty.

“I would also like to commend their effective response in anticipating and foiling all desperate terrorist attempts to target our citizens, security and public order,” he said.

Pointing out that he is aware of their difficult working conditions, due to the limited resources available, he urged the government to provide the security authorities with the necessary human and material resources to enable them to carry out their duty properly.

“For police action to be credible, a firm response to criminals and advocates of extremism and terrorism is required, within the framework of the law and in respect of rights and liberties, under the control of judiciary,” said the Sovereign who also commended the Royal Armed Forces, the Royal Gendarmerie, the Auxiliary Forces, the National Security Forces, the Emergency Services and the local authorities “for their devotion and constant mobilization to defend the nation’s unity and sovereignty and preserve its security and stability.”

“I would like to thank all members of civil society and true patriots, who are keen to serve their country, for their strong commitment at my side to build a unified, free and developed nation, as well as for their firm action against the vile conspiracies hatched against our country,” he went on saying.

At the international level, the monarch underscored that the coordination and cooperation between Morocco’s security services and their counterparts from a number of sister and friendly nations “has contributed to foiling numerous terrorist operations and preventing major human tragedies in these countries.”
“Indeed, Morocco is a key partner in the fight against terrorism, both at the level of security cooperation, with a number of sister and friendly nations, and through its unique approach to managing the country’s religious affairs,” king Mohammed said, recalling that this position allowed Morocco to co-chair, with the Netherlands, the Global Counterterrorism Forum.