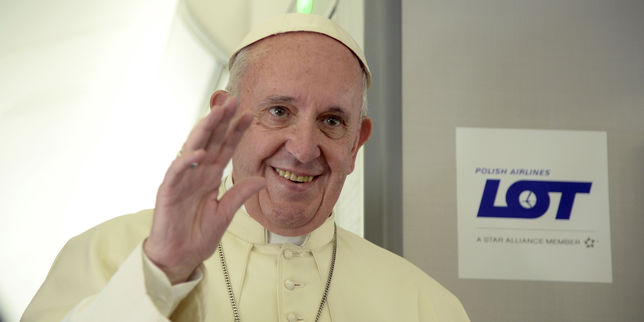 ‘’It is not true and it is not right to say that Islam is terrorism,’’ he said aboard his plane on his way back from Poland.

‘’I don’t think it is right to equate Islam to violence… Every day when I open papers, I see violence in Italy, someone who killed his girlfriend, another who killed his mother in-law, and they are baptized Catholics,’’ he said.

The Pontiff was returning from Poland where he attended a week long Catholic global event in the Polish city of Krakow.

The comments of the head of the Roman Catholic Church come following the murder in France of priest Jacques Hamel, 86, last Tuesday by two IS militants.

Muslims attended Catholic mass in churches around France and also in Italy on Sunday to express sympathy and sorrow following the murder of the priest.

“Terrorism… grows where the God of money is put first” and “where there are no other options.”

“How many of our European youths have we left empty of ideals, with no work, so they turn to drugs, to alcohol, and sign up with fundamentalist groups?” he asked.