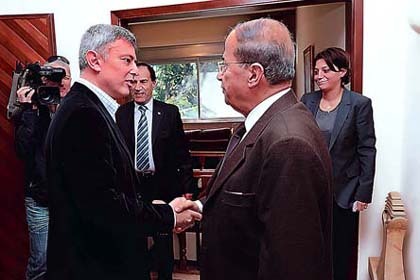 French President Francois Hollande has urged Saad Hariri, leader of the Mustaqbal Movement, to support the candidacy of MP Michel Aoun of the Free Patriotic Movement (FPM) for the presidency instead of Marada chief MP Suleiman Franjieh, currently backed by Hariri, according to sources from the March 14 camp.

Aoun is supported by the rival March 8 coalition and March 14 sources claimed that “Hollande has advised Hariri to visit Aoun at his residence in Rabeih” because “the solution to the internal crisis can only come from Aoun’s side.”

The proposal was reportedly made during Hariri’s visit to France at the end of last month.

Lebanon has been without a President since May 2014 following the end of President Michel Suleiman’s term and 40 attempts by the parliament to appoint a successor have failed due to political divisions that led to systematic boycotts of sessions resulting in the lack of quorums.

Franjieh’s chances to be elected as president are “dwindling” according to MP Walid Jumblat. He spoke of “a new presidential candidate” that he declined to identify but stressed that he could be supporting Aoun if it is in “Lebanon’s interest.” He added that reconciliation between Aoun and Lebanese Forces chief Samir Geagea, an ally of Hariri in the March 14 camp who withdrew his own candidacy in favor of Aoun, “cannot be set aside.”

At the beginning of the month, interior minister Nouahd Mashnouq said Franjieh’s nomination was spearheaded by Saudi Arabia. He said his party’s vetoes that blocked Aoun from the presidency have been withdrawn raising hopes ahead of the next electoral session.

Hariri is expected to react to the statements during the Iftar banquets organized by the party and a party official said the political bureau will assure that “Mashnouq’s statements do not reflect Hariri’s point of view.”