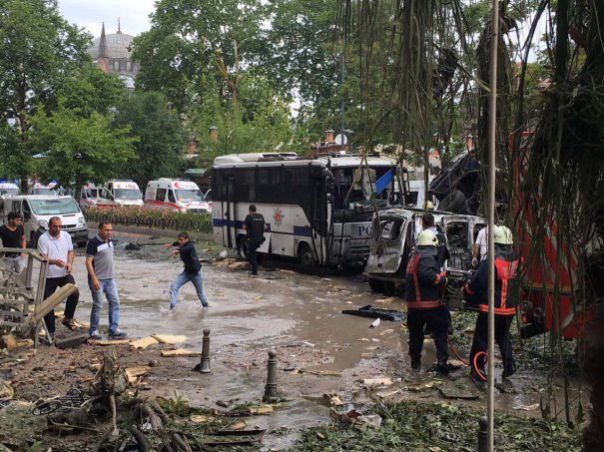 A bomb attack targeted early Tuesday a police vehicle in the Vezneciler neighborhood of Istanbul killing seven police officers and four civilians and injuring 36 others.

“We will continue our fight against terror until the end without getting tired” because “the acts of these terrorist groups are against humanity,” President Erdogan stated as he was leaving the hospital where the victims of the attack are being treated.

A bemused Erdogan questioned why security officers working to provide security, safety to life and properties are being attacked by terrorists. “This is unforgivable” he said while foreign minister Melvut Cavusoglu said “they are cold-heartedly exploding bombs on a Ramadan day” with reference to the holy Islamic fasting month.

No group has claimed the attack yet and the detonation is believed to have been triggered with a remote controlled device. The bomb is said to have been left in a car. Anadolu news agency reported that gunshots followed shortly after the explosion. Exams at the nearby Istanbul University building were cancelled.

Major cities in Turkey have suffered bomb and suicide attacks over the past few months and they are claimed by either the Kurdistan Workers Party (PKK) or the Islamic State group. Ankara is fighting both groups and has intensified its military operations against them.

Due to the increasing number of attacks, there are reports that the country’s Supreme Council for Radio and Television issued a temporary ban on covering certain details of attacks such as ongoing investigations, footage of victims and police discussion transcripts among others in a bid to “maintain public order, protect territorial integrity and prevent crime.”