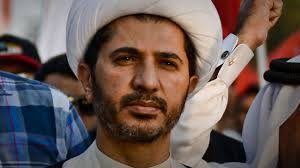 Sheikh Ali is accused of promoting a forceful change of the Kingdom’s political system, threatening to use illegal means, and inciting publicly the hatred of a sect of people to stir turmoil. He is also charged for inciting disobedience, publicly demeaning law enforcement agencies and their personnel as ‘mercenaries’, and alleging that some of these personnel are affiliated to terrorist organizations, according to general prosecutor Haroon Al Zayani.

Zayani also accused the outspoken opposition figure of calling for Jihad and of requesting superpowers to intervene in Bahraini affairs to support him to change the constitutional regime.

Zayani claimed that Salman’s “explicit call to violating the provisions of the law” and his call for forceful regime change led to “some groups” expressing their “readiness… to supply him with weaponry” in order “to adopt the method of the Syrian opposition and to transform the country into a military battleground.”

The defense lawyers stressed that Salman’s speeches being used against him were taken out of context. A joint statement by four major opposition groups warned that the court ruling “will further strain the security and political situation” while Al Wefaq said the ruling is “provocative.”