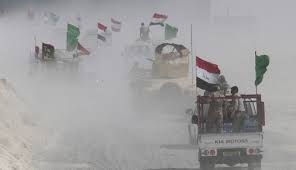 Lt. General Abdul-Wahab al-Saadi, commander in charge of the Fallujah operation, said there are “violent clashes” on the city’s outskirts as “the counter-terrorism troops along with other armed forces and Anbar (province) police have started pushing into the city” from three directions on Monday at dawn.

The operation to recapture Fallujah is more than a week old now and according to a military statement read on state TV, it is “steadily advancing” at the southern outskirts with the help of airstrikes. Two townships and a district police station are reported to have been recaptured.

There are an estimated 300 to 1200 militants of the Islamic State (IS) in Fallujah and some of them are believed to be well experienced in guerrilla and urban warfare. The city, around 50kilometres away from Baghdad, has been seized by IS since January 2014. It is believed that the group has dug underground tunnels to ease its movement and avoid airstrikes.

Saadi confirmed “there is resistance from Daesh, Arabic acronym for IS.”

Since the offensive began, only few civilians have been able to flee the city. There are reports that the terrorist group is stopping them from leaving as fighting continues. Around 50,000 civilians are believed to be trapped in the city and militia leaders taking part in the offensive said there is likely to be a pause before the assault on the city Centre begins so as to allow more civilians to escape.

Living conditions are worsening in Fallujah and there are concerns about how long it will take to free the city in order to avoid starving the civilians if they live to avoid bullets, shells and missiles.