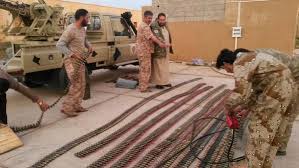 A local Libyan military commander in the ranks of Misrata’s Third Force confirmed the presence and engagement of British and American forces on the ground in Libya.

In an interview with The Times, Commander Mohammed Durat referred to an incident, which took place on May 12, saying that British forces helped to neutralize a truck loaded with explosives by militants of the Islamic State who were apparently preparing to launch an attack.

He said the truck was hit with a single missile fired by the British. The incident took place at the Shaddadah Bridge, 50miles away south of Misrata, and the local troops were fleeing before the British forces intervened.

The British troops are believed to be members of the Special Air Service or Special Boat Service, which are part of the elite military troops. A Javelin missile is believed to have been used.

During the operation, “our British friends seemed quite calm about it that day,” Durat stated. The bombing of the truck helped them to remobilize, he said adding that “not one of our own forces was killed” which hints that they usually suffer casualties when faced with such situations without the support of the well-equipped foreign troops.

“My unit works just with the English. I have met with them personally and they have destroyed two suicide vehicles that were targeting my fighters,” Commander Durat highlighted before adding that “the Americans and English are working here together helping us.”

The presence of foreign troops operating in Libya could be considered illegal as it not approved by any of the authorities in Libya and the government recognized by Washington and London rejected any foreign intervention in the country. With Western forces fearing that Libya could be used as a launch pad by Islamic State for attacks on their territories, several countries are believed to be having clandestine military operations in the country. The extremist group is estimated to have at least 3,000 militants in Libya.