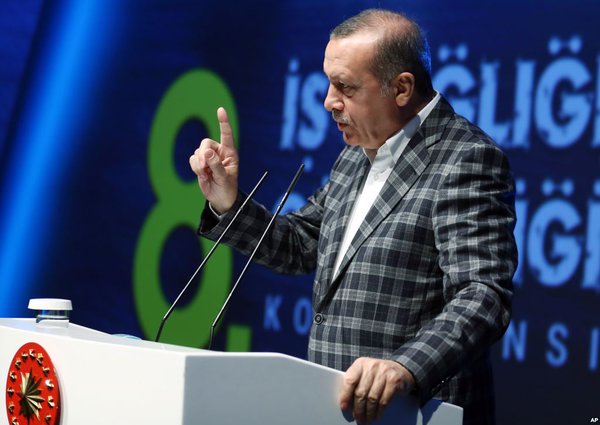 President Erdogan of Turkey accused European countries of betraying his country as he alleged that “they have left us alone in our struggle against this organization (ISIS) which is shedding our blood both through suicide bombings and by attacks on Kilis (a border town with Syria).”

He said Turkey paid “a heavy price,” more than any other country fighting ISIS in Syria. The outspoken Turkish president said European countries have “neither mercy nor justice” and accused them of practicing “dictatorship” and “cruelty” on Syrian refugees by closing their borders to them.

Turkey has been attacked on several occasions by bombings claimed by both the Islamic State and the Kurdistan Workers’ Party (PKK) prompting it to push for a much tougher anti-terrorism act, which has heavily divided the parliament and attracted international criticism about the respect of human rights.

Erdogan said “those who criticize us are reduced to sidelining democracy and freedoms when bombs started to explode on their soil” as he defiantly stated that Ankara has no plans to relax its policies as far as the EU visa waiver which is part of an immigrant exchange deal is concerned concluding that “we are going our way and you can go yours.”

“The indifference between the reactions to the bombs that exploded in Ankara and Istanbul and acts carried out in Paris and Brussels is nothing more than the incarnation of injustice,” he lamented.

Erdogan also threw a punch at the UN Security Council for its “unfair” structure with “five permanent members determining the fate of the world.” He said that “injustice is completely reinforced there” and wondered why “there is not a Muslim country” at the Security Council considering the religion’s 1.7 billion strong population.

Turkey is not part of the US-led coalition that is fighting the Islamic State but had given the coalition warplanes access to one of its airbases. It says its fight against the group is only limited to securing its border and stability while the coalition wants to bring an end to the threat posed by the group in Iraq and Syria.