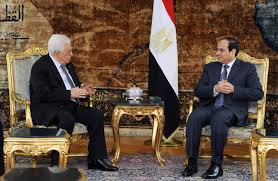 President Mahmoud Abbas discussed with his Egyptian counterpart, Abdel Fattah al-Sisi, in Cairo “ways of coordinating Arab efforts and the steps that need to be taken within the UN Security Council” to end the Israeli-Palestinian conflict during Egypt’s month-long rotating presidency of the Security Council.

Abbas arrived in Egypt on Sunday for a three-day visit and first met with Foreign minister Sameh Shoukry who left for New York on Monday to chair a ministerial meeting at the Security Council with the developments in Palestine on the agenda.

President Sisi said during the meeting with President Abbas that the Palestinian cause continues to be a priority in Egypt’s foreign policy and stressed the need to protect the genuine Arab doctrines regarding it. He said reaching an equitable and comprehensive solution to the conflict would promote regional stability and security.

Egypt is concerned about the crisis especially along its border with Gaza in the Sinai where it is fighting armed extremist groups that it believes cooperate with Hamas after the ousting of president Morsi in 2013.

The border has been closed since then and Hamas interior ministry said 2015 was the worst year in matters of closure, as the Rafah border crossing was only opened for 21 days in total. Cairo also destroyed tunnels used for smuggling goods into Gaza.