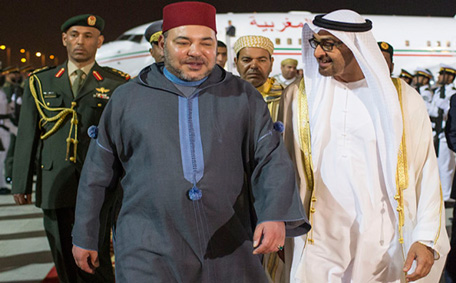 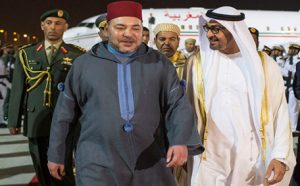 Talks focused on the brotherly relations and cooperation ties between the two countries, as well as on current regional and international developments.

The two sides reviewed ways to strengthen the two countries’ fraternal relations in political, economic and developmental fields in a way that will serve their common interests and the aspirations of their peoples, reported WAM news agency.

The two sides hailed the strong ties binding the UAE and Morocco and the two countries’ shared keenness to enhance these relations further on the basis of cooperation and solidarity, deeming that such relations should stand as an example of bilateral ties among Arab countries to overcome challenges through cooperation, coordination, consultation and brotherly dialogue that takes into consideration joint interests, progress, security and stability.

King Mohammed VI and his interlocutor also welcomed the outcome of the first Morocco-GCC summit, which was held in Riyadh recently and which sealed the strategic partnership between the North African country and the Gulf grouping.

This partnership was built up, as underlined by King Mohammed VI during the Riyadh Summit, thanks to the partners’ shared determination and their belief in their common destiny.

“The Moroccan-Gulf partnership is not the result of transient interests or calculations. Rather, it derives its strength from a firm belief that ours is a common destiny and that we hold the same views on issues of common concern,” had said the Moroccan King in his speech before the summit.

As an illustration of these strong bonds, the GCC member states renewed their support to Morocco’s territorial unity and reaffirmed their “total rejection of any act that may affect Moroccan supreme interests, on top of which the Moroccan Sahara issue.”

They also renewed backing to the Moroccan autonomy plan as the basis for any settlement of this regional artificial dispute.
The meeting Between King Mohammed VI and Sheikh Mohamed also discussed a number of issues of mutual interest and latest regional and international developments.

In this vein, they emphasized the importance to coordinate stances and to consolidate efforts within the Arab framework to confront challenges and to counter terrorism and violence that undermine the region’s security and stability, and to perpetuate the values of peace, tolerance and peaceful co-existence.

The visit of King Mohammed VI in the UAE is the fourth leg of a tour in the Arab Gulf countries. The tour started on April 20 in Saudi Arabia, where the King attended the Riyadh summit.

The king later on visited Bahrain and then Qatar, where he conferred with King Hamad bin Isa Al Khalifa and Emir Tamim bin Hamad Al Thani.