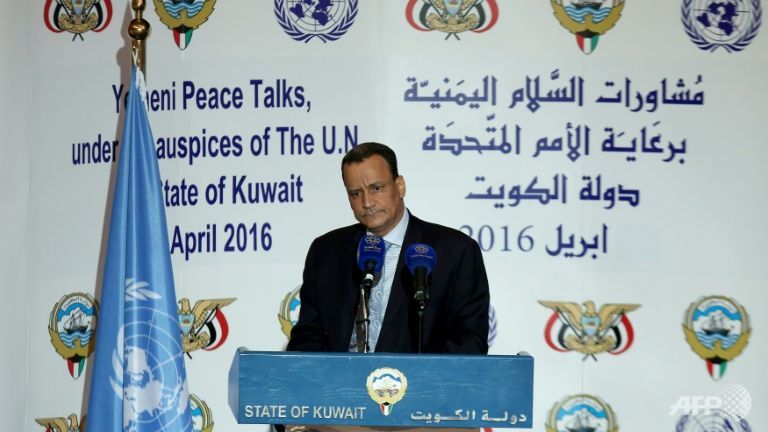 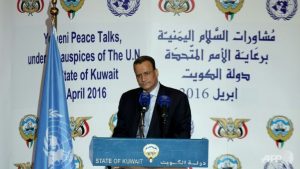 The Yemeni government has “suspended its participation” in the ongoing talks with the Houthi Movement in Kuwait “because of the continued violations by rebels and their takeover of Al-Amaliqa base.”

Foreign Minister and head of the delegation to the negotiation, Abdulmalek al-Mikhlafi, who twitted the announcement, added that the decision will be maintained “until guarantees for compliance were provided.”

The taking over of the military base took place on Saturday; the same day that the government and rebel forces held their first direct talks.

The talks are being held under the auspices of the UN to end the Yemeni war and special envoy for Yemen, Ismail Ould Cheikh Ahmed, said “we understand the reasons that lead to this decision” before reminding the parties that “Yemenis are counting on them” for peace.

Mikhlafi’s spokesman Mane al-Matari said they want guarantees that the Houthis will respect the ceasefire and withdraw from the base.

Special Envoy Ismail is hoping that “all difficult issues” will be discussed transparently in order to reach “a comprehensive agreement” to put an end to such incidents as he stressed that “we are not underestimating the importance of what happened or what is happening.”

Both sides have accused each other of committing thousands of ceasefire violations over the past weeks but according to sources, the attack on the 600-strong brigade at the Al-Amaliqa military base that has “chosen to remain neutral” in the war since 2014 is a setback to the talks. Mikhlafi said the attack “torpedoes the peace consultations” while the government has called on the UN envoy, Kuwait and other Gulf States and countries to pressure the Houthis “to comply with peace requirements.”

Ismail said direct talks held before the suspension were “productive” and the warring parties have agreed to resolve outstanding issues without convening joint sessions.

Analysts think that even if an agreement is reached, chaos could continue because the Islamic State has gained a foothold on the ground while al-Qaeda has increased its influence.