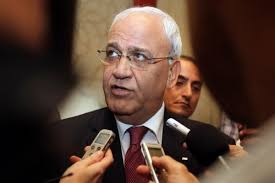 The PLO Executive Committee Chairman Saeb Erekat reacted to Prime Minister Netanyahu’s statement against the French peace initiative saying that the rejection of the International Conference is “a ratification of the Israeli government’s decision to continue on with their crimes and offenses.”

Netanyahu said on Thursday that “direct bilateral negotiations” without any precondition or initiative is “the best solution to the conflict.”

Erekat said the negotiation urged for by Israel “isn’t a call to come to an agreement for two states, but is an attempt to legitimize the development of the settlements, and is coercion by an apartheid government.” According to him, Netanyahu’s statement is in line with “the official response” the Palestinian authorities received from the Israeli delegation during the sixth Israeli-Palestinian dialogue session held in February. Palestine had requested that Israel stops its military actions, daily raids and incursions into the West Bank especially Area A and reaffirm its commitment to the signed agreements or else they would be obliged to review their ties and security coordination.

The French initiative seeks to revive the talks between Israel and Palestine but with Tel Aviv finally rejecting it on Thursday, after several months of doubts, hopes to end the conflict fade away.

Erekat said Palestinian authorities are still looking forward to the international peace conference and renewed their call for international recognition of Palestine as an independent state.