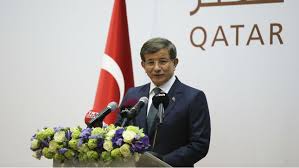 Turkish Prime Minister Ahmet Davutoglu said during his visit Thursday to Doha that the deployment of Turkish troops to the military base in Qatar, the country’s first in the Middle East, “was not directed at against any nation” but it is rather a move that would help to “counter threats to both countries.”

The Turkish Prime Minister’s remarks also hinted that Ankara is not interested in contesting other military powerhouses stationed in the Gulf or member states of the Gulf Cooperation Council. Davutoglu said their presence is for stability.

For Ankara, the deployment of Turkish troops to a military base in Qatar, under a military deal signed in December, is meant to fight “common enemies.”

The number of troops to be deployed is yet unclear although it is claimed to be around 3000 when the construction of the base is completed. Qatar will also have a base in turkey as part of the agreement.

Qatar is hoping that trade between the two countries will be reinforced as its Minister of Economy and Commerce Sheikh Ahmed told the 11th Turkish-Arab Economic Forum that “free trade agreements between Arab countries and Turkey would have a big role on investment opportunities.”