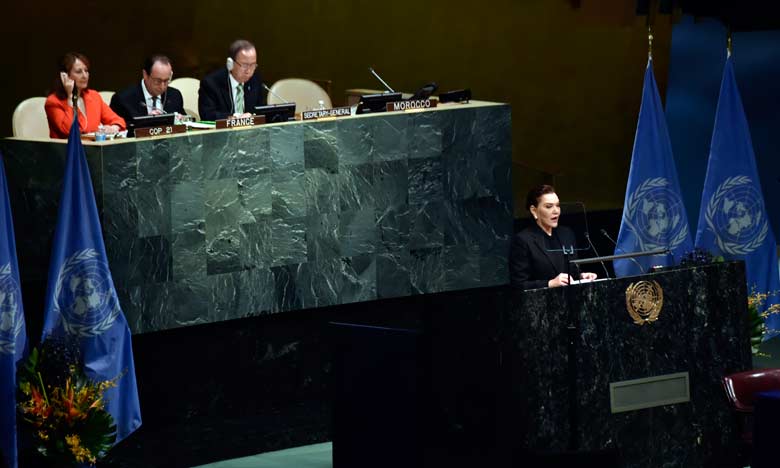 Morocco, host country of the 22nd United Nations Conference on climate change (COP22) scheduled in Marrakech next November 7-18, has officially signed at a high profile ceremony at UN Headquarters in New York the Paris climate change agreement sealed at COP21.

On this occasion, King Mohammed VI addressed the United Nations. In a speech read out on his behalf by Princess Lalla Hasnaa, his youngest sister, the Sovereign said “We are proud Morocco is going to be among the first nations to sign the historic Paris Agreement on climate change and we pledge, in this respect, to take the necessary measures to ratify it as soon as possible”.

“As we prepare for the COP22, which Morocco will have the honor of hosting in Marrakech, our collective efforts should focus on implementing the provisions of this comprehensive, balanced and equitable Agreement effectively”, said the Moroccan monarch.

To honor its climate change commitments, “the Kingdom of Morocco has adopted an integrated national policy to ensure environmental protection, tackle the effects of climate change and cut greenhouse gas (GHG) emissions by 32 pc by the year 2030”, he added.

In this regard, Morocco has launched several initiatives to promote the green economy; it has adopted the National Environment Charter as well as the energy efficiency strategy and has liberalized the renewable energy sector, stressed the Sovereign.

He also said that the North African Kingdom has set an ambitious goal seeking to meet 52 pc of its energy needs from renewable sources by 2030 thanks to major projects, particularly solar and wind farms.

In its “Intended Nationally Determined Contribution” (INDC) to address climate change to UN Framework Convention on Climate Change (UNFCCC,) the country has unveiled an ambitious plan to increase the share of renewable electricity capacity to 42 pc in 2020 and to 52 pc by 2030.

According to experts, Morocco’s efforts to boost renewable energy is gaining momentum, putting the country on track to reach a 42 percent goal within the next few years.

The projects that are currently under construction in wind, solar and hydro power will enable the North African country to achieve its renewable energy goals and be thus far ahead of its regional neighbors.

The Paris Climate Agreement, finalized at the UN climate conference in December 2015 is now open for signature for one year. It will enter into force once it is signed and ratified by at least 55 countries, accounting together for at least 55 percent of the world’s global greenhouse emissions.

The Agreement will become legally binding for the countries that have ratified it.