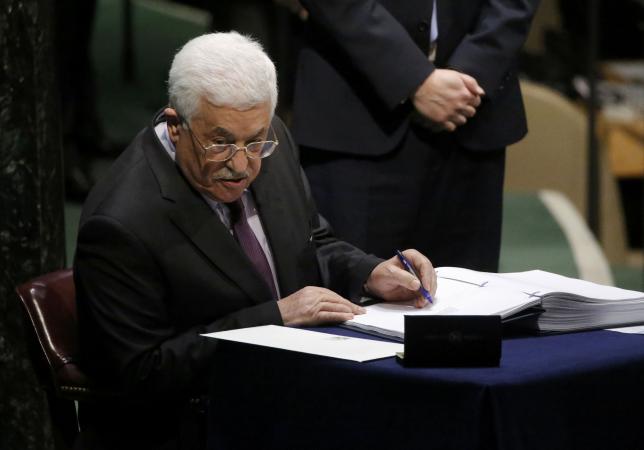 The Palestinian President Mahmoud Abbas called on the UN members to help his people end Israeli occupation which he said deteriorates the environment in the West Bank.

“Please help us in putting an end to the occupation and to settlements.”

President Abbas ratified the Paris deal on behalf of Palestinians who have won non-member observer status since 2012 at the UN giving them the chance to take part in treaty signing ceremonies.

Israel’s UN envoy, Danny Danon hit back accusing the Palestinian leader of using the UN platform to criticize his country.

“Instead of spreading hatred here at the UN, President Abbas should act to stop Palestinian terror,” he said after signing the treaty.

“This climate summit is supposed to be a demonstration of global unity for the sake of the future of our planet,” he added. “Unfortunately, President Abbas chose to exploit this international stage to mislead the international community.”

This latest showdown is the second this week between Palestinians and Israelis. Early this week, Danon and his Palestinian counterpart Riyad Mansour traded barbs at a meeting of the UN Security Council (UNSC) on the situation in Middle East. The two envoys yelled “shame on you” at each other. Danon accused Palestinians of praising terrorists killing Israelis while Mansour chided Tel Aviv for occupying Palestinian territories.

The Palestinians are backing France’s proposal to host an international conference to iron out differences and pave the way to the two-state solution said to bring peace to the region.

Latest efforts by the Obama administration to revive the talks stalled since 2014 have remained moribund after the two camps stuck to their respective conditions.