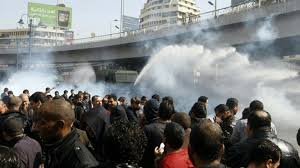 Egyptian police have fired tear gas at demonstrators who were protesting in Cairo against the President’s controversial deal under which two islands in the Red Sea, Tiran and sanafir, were handed over to Saudi Arabia.

The Friday demonstrations were the main wave of protest against Abdel-Fattah el-Sissi since he came to power in 2014.

According to an Egyptian official quoted by the state news agency, the security forces responded with tear gas after protesters threw rocks at them. He also claimed that the protesters were members of the banned Muslim Brotherhood group.

Protest without prior notification and approval is criminalized in Egypt since 2013 and the ministry of Interior said that it had not received any request from the organizers. It warned against “any attempts to break down legitimacy” and against activities “that aim to create chaos” and “confrontation between civilians and security forces.”

The call for the protest began on a Facebook page ‘The Land is Honor’ urging to stage protest movements in several cities and calling on Cairo inhabitants to march from 30 different mosques and churches toward Tahrir Square.

However, concerns emerged after the banned Muslim Brotherhood endorsed the protest claiming that “the picture has become clear” for all Egyptians to unite because “we are facing a group of criminals who are committing a gross violation against our land and history and honor.”

The statement from the group called on its supporters to “launch a spark of anger” that would help to “save the country.”

The support was quickly rejected by the Friday protest organizers as an attempt “to hijack the movement” for anti-government agenda.

Following the uproar and controversy triggered by the deal with the Saudis, El-Sissi and his government defended the decision maintaining that the two Red Sea islands belong to Saudi Arabia, which asked Egypt in 1950 to protect them from Israel.

The government also argues that the agreement allows Egypt to use shared Red Sea waters around the two islands for extraction of natural resources.